Defining the Different Types of Discrimination in Health and Social Care

Of all the jobs that involve interacting with people, working in health and social care is likely one of the most demanding, as the very wellbeing of individuals is entrusted to you: the caregiver. But it can also be one of the most rewarding, especially if you treat the people you work with and your service users right.

By providing each and every patient with person-centred care, their quality of life will be greatly enhanced during what could otherwise be a difficult time for them. Likewise, being supportive and amiable towards colleagues in your healthcare environment will infuse them with feelings of positivity and the motivation to also treat others well.

To effectively do so, you need to understand what types of discrimination you should be preventing.

Why is Preventing Discrimination Important?

As you’ll no doubt know as someone who is dedicating their life to upholding people’s healthcare and wellbeing, the emotional needs of a person are equally if not more important in some cases than the physical.

Try to comprehend the idea of being mistreated or not suitably accommodated by someone devoted to delivering care: it’s ironic. Being discriminated against by a healthcare professional is detrimental to a person’s emotional needs and denies them adequate treatment, which is as much a disservice as a chef sending out chicken to guests raw.

And yet discrimination in the healthcare industry is widespread – targeted at both service users and fellow caregivers – ranging from gender inequality, through ageism and racism, to the mistreatment of transgender people.

Our Equality and Diversity in Health and Social Care Training explains what the Equality Act 2010 requires of health and social care providers, what is meant by discrimination, harassment and victimisation, and how you can improve your own attitude towards equality and diversity.

What are the Different Types of Discrimination?

There are 4 different kinds of discrimination from which anyone with one or more of the protected characteristics is safeguarded:

There are also specific types that could fall under these categories, such as:

Click on the drop downs below for more information on these different types of discrimination in health and social care.

Who could be subject to discrimination?

This is the type of discrimination most people will face. If a person is intentionally treated less favourably purely based on the fact that they possess one or more of their protected characteristics, then it is direct discrimination.

Examples of direct discrimination include:

There are numerous real life cases about direct discrimination in the healthcare industry – scroll to the bottom of this article to read three diverse examples of this.

When there is a practice, condition, policy, or rule that applies to everyone but inadvertently puts people with one or more of the protected characteristics at a disadvantage, it is considered indirect discrimination.

This will often be unintentional; the employer who made the decision or has plans for a new policy may think that by applying one general rule, everyone is being treated equally. It could be due to a lack of awareness, poor attitudes towards equality and diversity, or unconscious bias.

Examples of indirect discrimination include:

Often, people’s background, culture, or personal experiences lead to them adopting certain attitudes or perceptions without even realising it. It’s important to keep yours in check so to prevent indirect discrimination.

Remember: a person from another religion’s view of life will differ greatly from your own, and you must be accepting of their ideologies.

Examples of associative discrimination include:

Examples of perceptive discrimination include:

When a person is discriminated against for numerous protected characteristics, it is considered multiple discrimination. For instance, a woman who is giving birth at a hospital may be given less attention than other pregnant women who are of British nationality because she is gay and because she is of foreign origin.

It may even fall under more than one type of discrimination. For example: directly discriminating against a caregiver because of their age and gender and discriminating by perception by assuming they follow a certain religion and treating them poorly because of it.

The definition of harassment is simple: unwanted conduct related to a protected characteristic, which violates an individual’s dignity or creates an intimidating, hostile, degrading, humiliating, or offensive environment for that individual.

Examples of harassment include:

Even if the harasser is ‘just having fun’ or ‘wasn’t being serious’, it is still harassment nonetheless. Employees are able to report instances of harassment that they witness even if it wasn’t directed at them, and shouldn’t hesitate to do so.

This refers to individuals being harassed by anyone outside of the company. In a healthcare setting, where potentially hundreds of non-employees will be present on a daily basis, healthcare staff may be at a particularly high risk of third party harassment from service users. Preventing this is equally important; caregivers can only deliver their services effectively if they are free of harassment.

The sexual harassment case study in the section entitled ‘Case Studies’ below is also an example of third party harassment.

If a person is treated unfavourably or disadvantaged because they have made or assisted someone in making a complaint about discriminatory behaviour, this is known as victimisation. As mentioned above, you have every right to raise your concerns if you experience or observe discriminatory behaviour in the workplace, and being treated poorly for doing so is unlawful.

Examples of victimisation include:

Any instance of discrimination can and should be reported. Employers have a legal duty to take action and investigate the matter as soon as it comes to their knowledge that discrimination or harassment is taking place in their organisation – whether it be from an employee or a third party.

If you or someone you know – whether it’s a colleague or service user – has been subject to discrimination, please contact the government’s Equality Advisory Support Service (EASS).

For more information about discrimination, visit the Citizens Advice website.

Statistics on Discrimination in Healthcare

Ageism towards Elderly Woman with Leaky Valve
An elderly woman named Violet Simpson, 84, was receiving treatment for angina over the course of two years. Prior to having an operation for a bunion on her big toe, she was sent for a heart scan. It was then discovered that the issue was in fact not angina, but a leaky valve.

However, when requesting for it to be treated, Violet was disregarded by doctors. She said “I asked if I could have this fixed. The attitude from doctors was: What are you bothered about, at your age?”

She eventually managed to get an appointment; “I stuck to my guns and said I wanted this job done.” But she said “The whole experience made me feel pushed aside.” This was a clear case of age discrimination.

Same-Sex Couple’s Baby Refused Treatment by Paediatrician
In 2014, paediatrician Dr. Vesna Roi refused to care for a same-sex couple’s baby because of her anti-gay religious beliefs. After “much prayer” she’d decided she couldn’t treat their baby because they are lesbians. The couple had to instead be seen by a different paediatrician even though they had handpicked Dr. Roi out of all the ones they had interviewed. Dr. Roi sent them a letter of apology 4 months later, although she didn’t retract her refusal to care for their baby.

Dr. Roi made it clear that she was very strongly invested in delivering wholesome care; she stated “I love my families, my patients. I love my kids, and I have become very close with all my patients.” However, regardless of whether it was with ill-intent or not, her refusal was a clear case of direct discrimination against the protected characteristic of sexual orientation.

Female Receptionist Subject to Sexual Remarks in Hospital Environment
Between April and December 2009 and between June and September 2010, a female receptionist at a hospital was repeatedly sexually harassed by the same male patient. He made unwanted sexual comments both in person when visiting the facility and over the telephone when calling in.

Remarks included suggesting that she ‘run away’ with him, that he was ‘visualising her naked’, and inviting her to have sex with him. Despite the complaints the receptionist made to her supervisor, no action was taken to stop the harassment. This is a clear example of third party sexual harassment.

Whether it be a colleague or a service user, whether they’re young or old, or whether they’re the same nationality as you or of a different one entirely, everyone deserves to be treated well and have their needs fully accommodated.

Do what you can to prevent or eliminate any possibility of discrimination occurring. Do your best to dispose of any discriminatory attitudes you may have and work together with others in your healthcare team to ensure everyone has equal access to treatment and care. 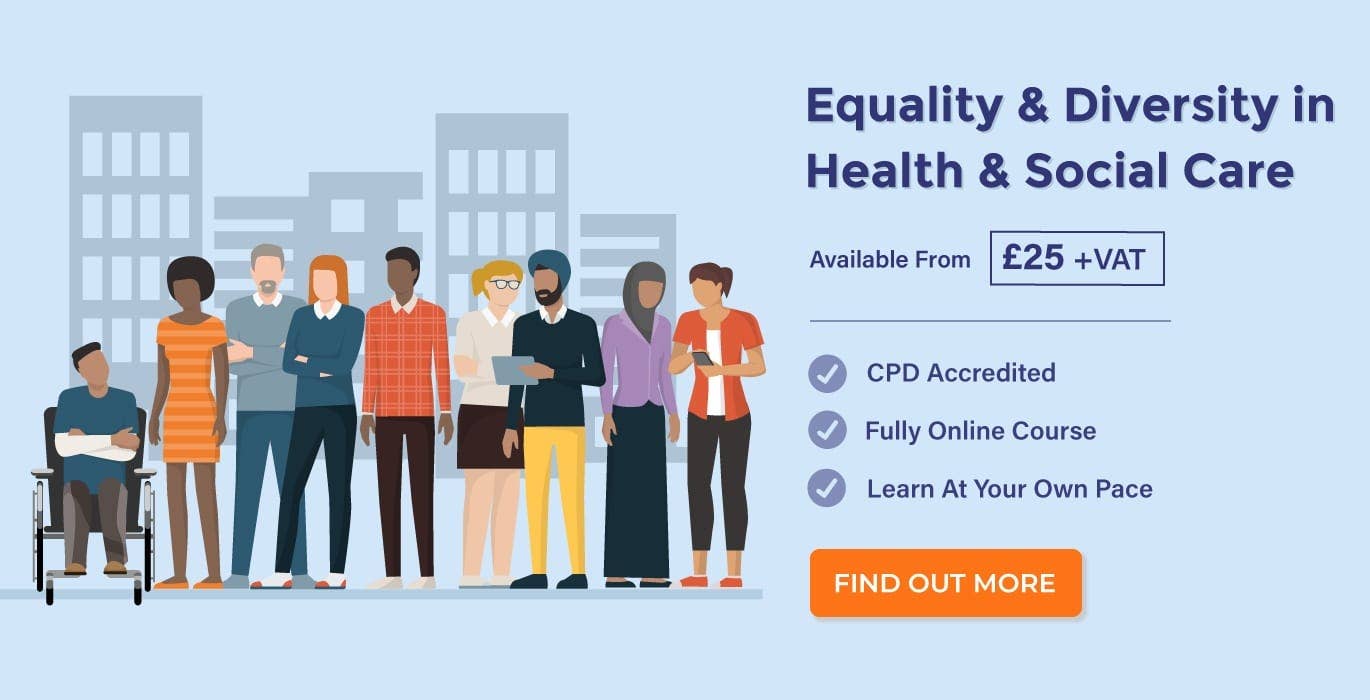 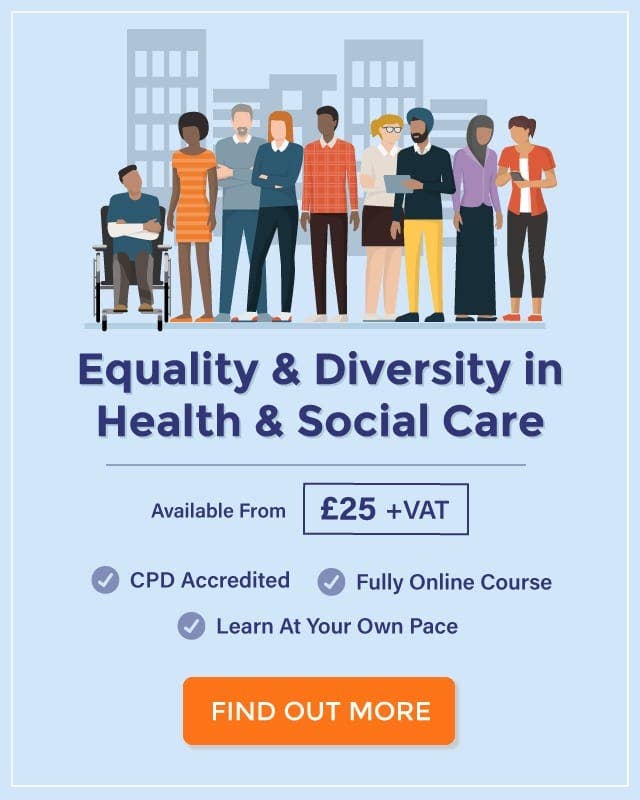