Anaphylaxis is a serious allergic reaction by the immune system which has the potential to be life threatening if not dealt with quickly and appropriately. Anaphylaxis can be triggered by all manner of allergens – including insect stings, certain foods and medicines – and sufferers must be incredibly careful so as not to send their bodies into anaphylactic shock.

Our FAQ below aims to answer some of your most common queries about anaphylaxis:

Can anaphylaxis occur due to bee stings?

Yes, any type of insect sting can trigger an anaphylactic shock, particularly stings from wasps and bees.

Common symptoms to look out for include swelling at the site of the sting and rashes or hives on the skin. More serious reactions include swelling of the mouth or throat, difficulty breathing or swallowing, stomach cramps and nausea, feeling faint and collapse/unconsciousness.

Is there a home treatment for anaphylaxis?

If a person is beginning to show signs of an allergic reaction then over the counter antihistamine medication can help to manage minor symptoms.

Most anaphylaxis sufferers carry an adrenaline auto-injector (e.g. Epipen, Anapen, Jext Pen, Emerade) which must be administered into the thigh as soon as an anaphylactic shock occurs. Anaphylaxis cannot be cured.

It’s also important to ensure that the person is comfortable, ideally lying down, and that an ambulance is called straight away. If the person is unconscious then carefully put them into the recovery position before administering an auto-injector.

Does anaphylaxis cause hypotension?

During an anaphylactic shock, chemicals (including histamines) are released into the body which cause the blood vessels to widen and blood pressure to drop. This lowered blood pressure is known as hypotension.

Symptoms of both anaphylaxis and hypotension include lightheadedness, feeling weak or faint, dizziness, fatigue, blurred vision and loss of consciousness.

Can pollen cause anaphylaxis?

Any substance has the potential to cause an allergic reaction, although severe anaphylaxis due to pollen is rare. People are more likely to suffer from hayfever (allergic rhinitis) as a result of inhaling tress or grass pollen.

Anaphylaxis is a more common reaction to insect stings, certain foods and medicines.

What is the best management of an anaphylactic shock?

If someone is having an anaphylactic shock then ensure that they are lying/sitting comfortably, call the emergency services and administer an adrenaline auto-injector (e.g. Epipen, Anapen, Jext Pen, Emerade) into their thigh as soon as possible.

The person may be able to carry out the injection themselves. If the person is unconscious then place them in the recovery position before administering the injection and performing CPR if necessary.

Are there any life threatening allergies?

During an anaphylactic shock the immune system mistakenly identifies harmless substances – such as foods and medicines – as harmful ones, and so releases a range of chemicals into the body.

These chemicals cause a range of severe and dangerous symptoms, including swelling of the mouth, throat and face, itchy skin, abdominal pain and nausea, difficulty breathing and swallowing, feeling faint and collapse/unconsciousness.

What is the difference between allergic reactions and anaphylaxis?

Can an allergic reaction cause high blood pressure?

During an allergic reaction the body comes under a lot of stress which can contribute towards high blood pressure (hypertenstion). This is particularly true if the allergy is undiagnosed and the body is in a constant state of allergen ‘fighting’, i.e. because of a specific food.

Allergic reactions are more commonly linked with low blood pressure (hypotenstion) caused by the widening of blood vessels as chemicals are released into the body to fight the allergen.

What is a biphasic allergic reaction?

A biphasic allergic reaction (or biphasic anaphylaxis) is where the body experiences a range of allergy symptoms anywhere from 1 to 72 hours after the initial reaction or anaphylactic shock.

The symptoms in this second reaction are commonly the same as the initial reaction but are typically less severe. A biphasic allergic reaction requires the same emergency medical treatment as a singular reaction.

Can you develop anaphylaxis later in life?

Yes, anaphylaxis and allergic reactions can develop at any point in a person’s life and at any age, although they’re more commonly diagnosed in childhood.

People with asthma, people with allergy-related skin conditions (such as eczema) and people who have suffered serious reactions in the past are most likely to develop anaphylaxis. Always see a GP for further advice and tests if you are concerned about your health.

Can anaphylaxis be mild?

Is it possible to have a delayed anaphylaxis reaction?

Anaphylactic shocks can develop anywhere from seconds to several minutes after exposure to an allergen.

For example, an anaphylaxis sufferer may consume a food they are allergic to but not see any symptoms until a delay of 30 minutes or more afterwards. Sometimes a person may experience a biphasic reaction, where the symptoms of anaphylaxis present themselves instantly and then re-occur up to 72 hours later.

Is anaphylaxis the same as an anaphylactoid reaction?

Anaphylactoid reactions are more commonly referred to as non-immune anaphylaxis and occur due to cell degranulation.

What is the onset time for anaphylaxis?

Anaphylaxis can develop at any time, from a few seconds to several minutes after exposure to the allergen. Sometimes an anaphylactic shock will begin immediately after contact with an allergen but on other occasions the symptoms may not develop until many minutes have passed.

Can an allergic reaction cause fever?

There is no reason why having an allergic reaction would directly cause fever, although some of the symptoms of an allergy may be similar to those of fever, such as rashes, fatigue, weakness, sinus congestion and swelling in the throat.

Can you have an allergic reaction to hay?

Yes, allergies to straw/hay do exist, although you’re more likely to suffer an allergic reaction from inhaling the straw dust rather than from contact with the straw itself.

Straw dust allergies are sometimes called ‘Farmer’s Lung’, which can cause serious lung problems if not diagnosed early. Taking over the counter antihistamine medication before handling hay/straw can help to manage allergy symptoms. 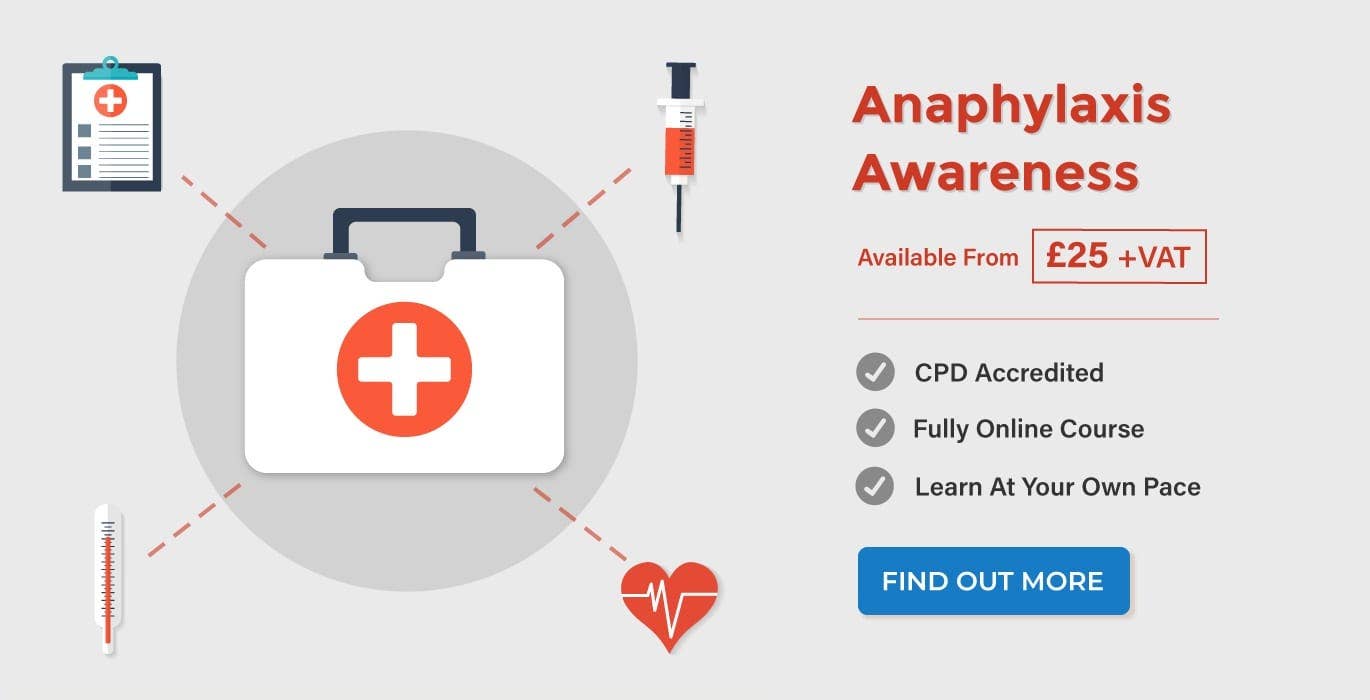 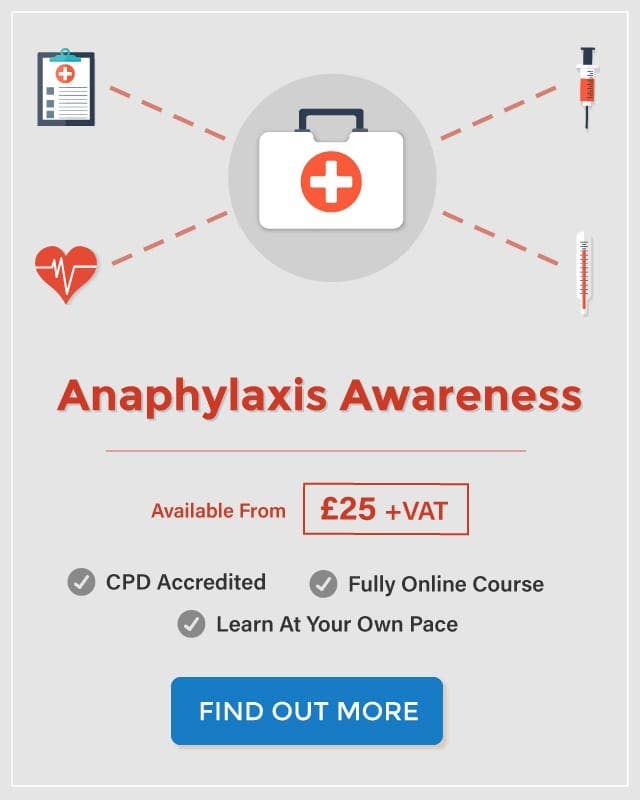 Why is Food Labelling Important?

How Much Do You Know About Food Fraud?