Speech, language, and communication are critical areas of development for children. They play a vital role throughout our lives, helping us to understand what is going on around us, communicate our basic needs and feelings, hold conversations, think and learn, develop relationships, solve problems, and more. They also support many other aspects of development, including cognitive, social, and literacy development.

Research has found, however, that in some areas, more than 50% of children entering reception have language levels below what is expected for their age. Since the beginning of the COVID-19 pandemic, this statistic has likely worsened as language development has regressed for many children, leaving them behind their peers.

The contents of this article are as follows:

What Does Normal Language Development in Early Childhood Look Like?

As you can see, learning how to communicate is quite complicated. The good news is that children are programmed to be able to do it, but they do need lots of input from adults to be able to kickstart this process. This also needs to be direct, face-to-face input from a real human being; children can’t learn language effectively from TV or computer games, even if they are ‘educational’ (Kuhl, 2007 and others). As a result, the more you talk to a child (or baby) and support their language, the more progress they will make.

We use milestones to get a sense of what normal language development looks like – this is a more accurate way of measuring than attempting to compare one child with another, because all children are different. Understanding each milestone of development will help you to choose the right strategies to support a child with their speech and language.

Ages and Stages of Language Development

Babies start learning to recognise language even while they’re in the womb. Research has shown that they remember stories that they were read while they were in utero, as well as recognising their mother’s voice (DeCasper and Fifer, 1980, 1986; Kisilevsky et al., 2003).

Once they’re born, their development tends to progress through the following stages:

Communication and Language in the EYFS

If you are an early years worker, you can also use the Early Years Foundation Stages (EYFS) to measure a child or baby’s development. The early learning goals for communication and language are:

Children are expected to achieve these goals when they have turned five years old. Ofsted inspectors will check to see whether early years practitioners are using adequate strategies to help children develop their communication and language skills. We will provide some ideas of strategies you can use later in this article.

Why is Speech and Language Development Important?

We have already mentioned that speech and language development is vital in a child’s life, but a more detailed list of the benefits associated with it includes:

As a result, it is important to do whatever you can to help the children and babies in your care to improve their communication and language skills.

Our course on Supporting Speech and Language Development in Early Years explains what typical development in this area looks like, discussing a range of support strategies approved by speech and language therapists, and going into detail about speech, language, and communication needs – including what causes them, warning signs, and how to help children who you know or suspect might have them. Have a look at our course library to see this and other courses that we offer.

How Do I Recognise Speech Disorders in Children?

As with all types of development, things can go wrong when children are learning to communicate. This could be due to difficulties with learning, cognition, hearing, or sight, or a poor learning environment with little interaction with adults. In this section, we will describe the different types of language problems, their symptoms, and what you should do if you suspect a problem.

Being aware of the different types of language problems will help you to communicate the problem to a professional, if necessary, as well as giving you an idea of how you can help in the meantime.

Symptoms that could indicate a language problem include:

It is not always a problem if children do not meet milestones ‘on time’ – there is a huge range within normal development. However, if you are worried that a child is behind where they should be, making a list of when they do achieve each milestone will help you see whether there is a pattern.

Be aware that language development will be slightly different for English as an Additional Language (EAL) children. Having less exposure to English will mean that they develop more slowly – they are not necessarily delayed, they just haven’t heard enough of the language to learn it yet.

What Should I Do if I Suspect a Problem?

It’s important to act if you suspect a language problem, because delayed language development can cause frustration for you and the child, as well as difficulties learning and making friends, and behavioural problems. On the other hand, early intervention can be extremely helpful and mitigate any effects of the delay or disorder.

If you are worried about a child’s language development, the first step is to talk to your GP – if you are not the child’s parent, you may wish to tell the parents your concerns and suggest that they book an appointment. You don’t need to try and diagnose the problem that the child is experiencing, but giving the GP or parents an idea of the symptoms would be useful.

There are often long waiting times for intervention, so in the meantime it’s important that you use all the strategies we will list in the next section to ensure that the child has as much support as they possibly can. Try to understand the problem thoroughly so that you can be empathic and make it easier for the child.

We have put together eight strategies that you can use to encourage children to develop their language. You may already use some of these strategies, or may need to change what you are doing slightly to maximise the learning opportunities you give to the children and babies around you. Whatever you can do will be helpful in giving them the best outcomes possible.

Since children often learn by observing and copying adults, you need to ensure that you are modelling good speech and language skills as much as possible, including:

Being a good role model only requires you to adapt your behaviour slightly, and can have extremely rewarding results.

Reading in early years is extremely effective for language development – it also has many other benefits, as you can find out in our article ‘Why is Reading Important for Children?’. Try to read books every day if you can – it is even useful for babies under six months, but is particularly effective as they get older.

When you read, point to the words as you say them. This helps the children link the spoken word to the written word, and will aid their literacy development later on. Talk about each page to encourage the child to speak – for example, you could say ‘that’s a lot of food – what’s your favourite food?’.

Engage them in the book by using intonation, pointing to pictures, and letting the child guess what will happen next. Toddlers might want you to read them the same book over and over again – this is great for getting them to really absorb the language, and testing whether they can finish the sentences for you. Alongside their favourites, read children books on different topics, particularly as they get older, so that they broaden their vocabularies. Talk about words that they aren’t familiar with, asking them if they know what it means, and explaining it if not.

Naturally, talking to a child as much as you can will assist their language development. It’s important to talk to them even when they can’t talk to you – from birth, you should chat about what you’re doing and ask them questions, responding to any gestures or noises they make as if they’ve spoken a sentence. This teaches them how conversations work, and exposes them to lots of vocabulary and sentence structures to become familiar with.

To make your conversations even more impactful, think about:

Singing is particularly important for babies and younger children – it can really help their language development by supporting them in differentiating sounds, recognising rhymes, improving their memories, and broadening their vocabularies. Just as with reading, pause before the end of a song line, getting the children to fill in the gap – for example, ‘twinkle, twinkle, little… (star)’.

You could make up your own songs, or ask older children to do so. If they’re silly, the children might enjoy and remember them even more!

Games are great language activities that you can try out. You could try:

There are also lots of other games that could be just as fun as these suggestions – see what you can come up with!

Pretend play helps children to broaden their vocabularies – you could get them to dress up as characters from their favourite book, make up their own stories, or try role-play using some simple props.

During the play, encourage the child to name the objects that they’re using and ask them questions like ‘what are you doing now?’, ‘where’s teddy’s hat?’. You could give them simple instructions within the play, such as ‘put teddy down’, making them more complicated for older children (‘make your dolly sit on the chair’).

Rhymes are key for language development, just like singing. In addition to helping children to differentiate sounds and learn more words, rhymes increase phonological awareness skills and prepare children for learning to read.

You could play games – such as coming up with a word that the children have to find lots of rhymes with – or make up poems together. Reading rhyming stories is another good way to incorporate it into everyday life.

To maximise opportunities for language development, ensure that the environment around you is conducive to good communication. This means:

We hope that these eight strategies will give you a good starting point for supporting language development.

Language development in the early years is crucial for children’s outcomes later on – by using supportive language strategies and learning to recognise potential problems, you can help them to achieve the best outcomes possible. We hope you have found this article helpful! 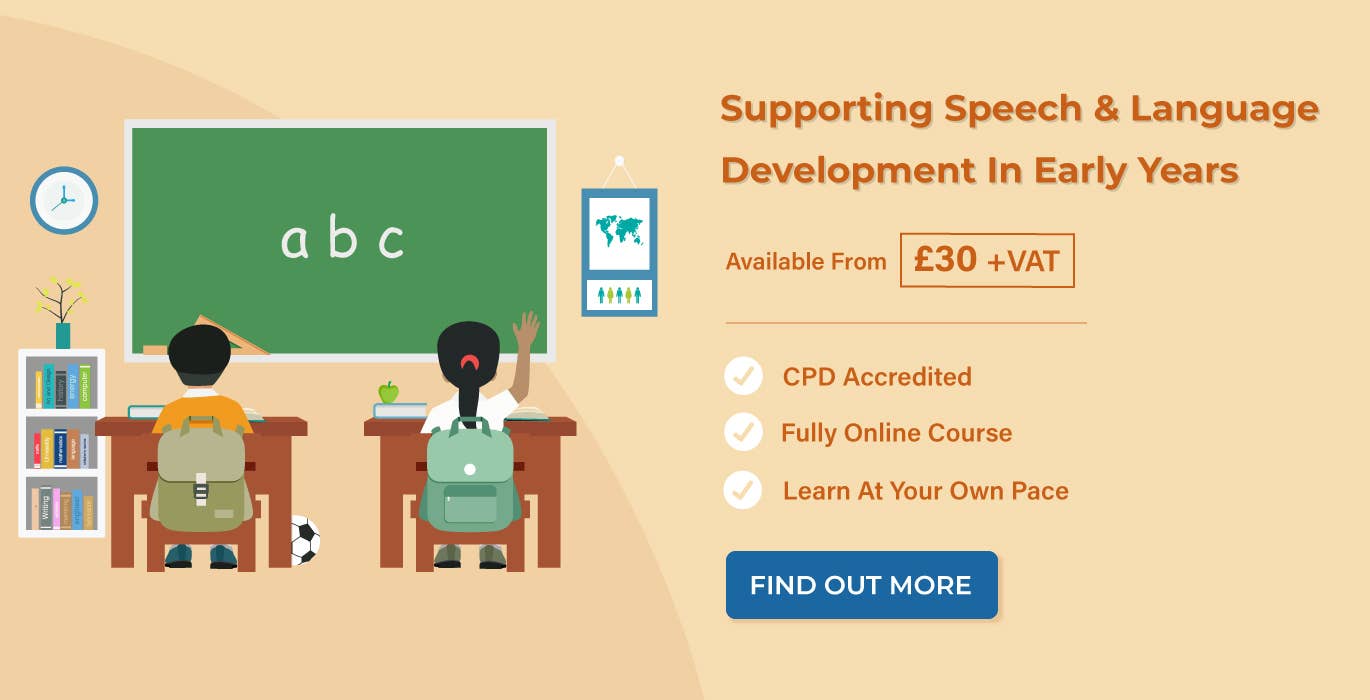 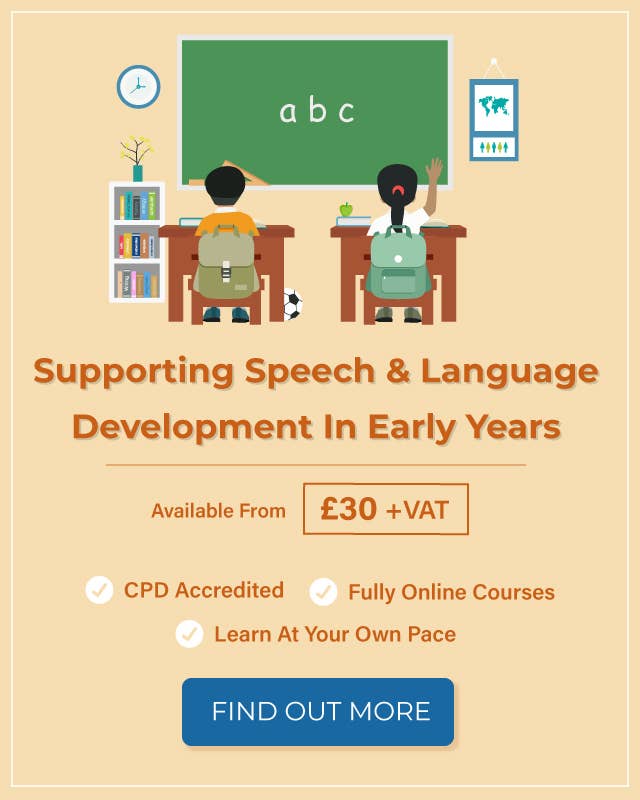 How to Deal with Challenging Behaviour in the Classroom

What are the Best Practices for Online Teaching & Learning?