How to Promote LGBTQ+ Inclusive Education in Schools

For education to be inclusive, children and young people need to see themselves, their families, and their experiences acknowledged and reflected positively – both in the messages that their school culture promotes and reinforces, and through the content of curriculum itself.

This article looks at how we can increase that inclusivity for children and young people who identify as LGBTQ+ (lesbian, gay, bisexual, trans, queer/questioning, and other sexual and gender identities).

In this article we will look at what issues might be facing LGBTQ+ children and young people at school, strategies to provide support for those issues, and how to establish a more inclusive whole-school culture and curriculum.

Government research shows that the experiences of individuals who identify as LGBTQ+ are still disproportionately difficult within UK society. The resulting government action plan highlighted the importance of improving educational experiences for LGBTQ+ young people.

Whilst some schools are providing LGBTQ+ young people with a supportive environment, where they feel safe and respected, unfortunately this is not everyone’s experience.

These issues are not only found in secondary schools. A report on homophobic bullying found that in primary settings:

As these findings show, for many young LGBTQ+ people, school can be a negative experience which impacts on their self-esteem and mental health.

Our Child Mental Health Training provides you with a detailed understanding of child mental health, including how to identify and support a child who may be struggling, and how to promote positive mental health and wellbeing.

There is a danger that such children will become disengaged with education and not fulfil their potential.

However, as the Stonewall School Report 2017 confirmed, pupils who are taught positively about LGBTQ+ issues are much more likely to feel welcome, included, and experience higher levels of both attainment and wellbeing.  This means that, as educators, we have the power to improve those figures mentioned above.

What is LGBTQ+ Inclusion?

Positive reinforcement, through inclusion, can help shape how young people feel about themselves and how they view others. Encountering diversity and inclusivity at school is critical, as it is during these years that we learn most about ourselves and the world around us.

By embedding a culture of positive messaging and curriculum visibility regarding LGBTQ+ identities and issues, it will not only promote the wellbeing of those who identify as such, but also promote empathy, tolerance, and respect throughout the school population.

By teaching children to be good LGBTQ+ allies from a young age, schools can help tackle the homophobic, biphobic, and transphobic discrimination that is unfortunately still present in society.

Providing an inclusive educational experience for LGBTQ+ children and young people, or those with LGBTQ+ family members, is not a ‘nice to have’ – it is a legal responsibility which schools need to fulfil.

Gender reassignment and sexual identity are among the nine protected characteristics under The Equality Act 2010. Under the public sector equality duty of this act, schools must have due regard to the need to:

Many schools and colleges have already made great strides towards ensuring that their policies, culture and curriculum take this into account. However, with LGBTQ+ children and young people being twice as likely to be bullied than their non-LGBTQ+ peers, there is still work to be done.

What is an LGBTQ+ Inclusive Curriculum?

Between 1988 and 2003, due to Clause 28, it was illegal for schools in England to “intentionally promote homosexuality or publish material with the intention of promoting homosexuality” or “promote the teaching in any maintained school of the acceptability of homosexuality as a pretended family relationship”. This meant that LGBTQ+ identities and issues were completely absent from the curriculum, with teachers being unable to discuss them.

The curriculum has come a long way since then. The Relationships Education (primary) and Sex and Relationships Education (secondary) statutory guidelines now include learning outcomes throughout the key stages which reflect the experiences of those who identify as LGBTQ+ and/or those growing up within LGBTQ+ families. It also carries the statutory requirement to make sure that the needs of LGBTQ+ children and young people are appropriately met and that all pupils understand the importance of equality and respect.

However, in order to make sure all pupils are reflected, represented, and helped to reach their full potential, schools should aim to go beyond the statutory curriculum content to promote LGBTQ+ inclusivity.

In September 2021, Scotland became the first country to embed LGBTQ+ inclusive education throughout the curriculum, providing training and resources for teachers to help achieve this.

The following strategies and tips can be used, in addition to the statutory RSE content, to help embed inclusivity throughout the curriculum.

Try to incorporate LGBTQ+ figures and issues in your planning.

This should be done from day one of an individual’s school journey.

Increase representation in your resources.

This can be done in a variety of ways.

Stonewall have produced some detailed ‘Getting Started’ guides for different age groups with practical guidance on building an LGBTQ+ inclusive curriculum. These can be found here along with other teaching resources.

How to Support LGBTQ+ Students in School

Here we will consider some strategies for the second strand of LGBTQ+ inclusion: promoting positive messaging and addressing discrimination within the school culture.

Have the relevant policies in place.

It is a requirement that all prejudice-based incidents are recorded, and need to be shared with Ofsted during any inspection.

Promote a zero-tolerance attitude to homophobic bullying and language.

Unfortunately, many children may come across the use of this kind of language at home or outside of school. It is therefore vital that, within school, children are taught that using homophobic language is unacceptable.

Staff should also be aware that many young people who do not identify as LGBTQ+ are still subject to anti-LGBTQ+ bullying because they do not conform to their peers’ expectations of non-LGBTQ+ identities.

Setting up groups for young people to come together in a safe space can have a positive effect on individuals. Once the organisation is set up, they can provide valuable pupil voice feedback as to what they are experiencing in school and any recommendations for improvements.

As part of the government’s ‘LGBT action plan’, schools should make sure they signpost support for LGBTQ+ young people, who may be experiencing bullying or wellbeing issues. This signposting should ideally be through a variety of media – including posters on notice boards, details on school websites, etc.

It should include details of support that young people can access in school, as well as outside of school.

The Trevor Project provides an online space where young LGBTQ+ people can access information and support 24/7. They have access to trained counsellors and provide crisis intervention and suicide prevention services to young people under 25.

Improving the experience of young people who identify as LGBTQ+ should be a priority in all schools. Whilst many schools are making progress towards that goal, it is clear that we still have a long way to go. It’s important to raise awareness of LGBTQ+ issues, take consistent measures to ensure positive whole-school cultures, and ensure appropriate representation within the curriculum. 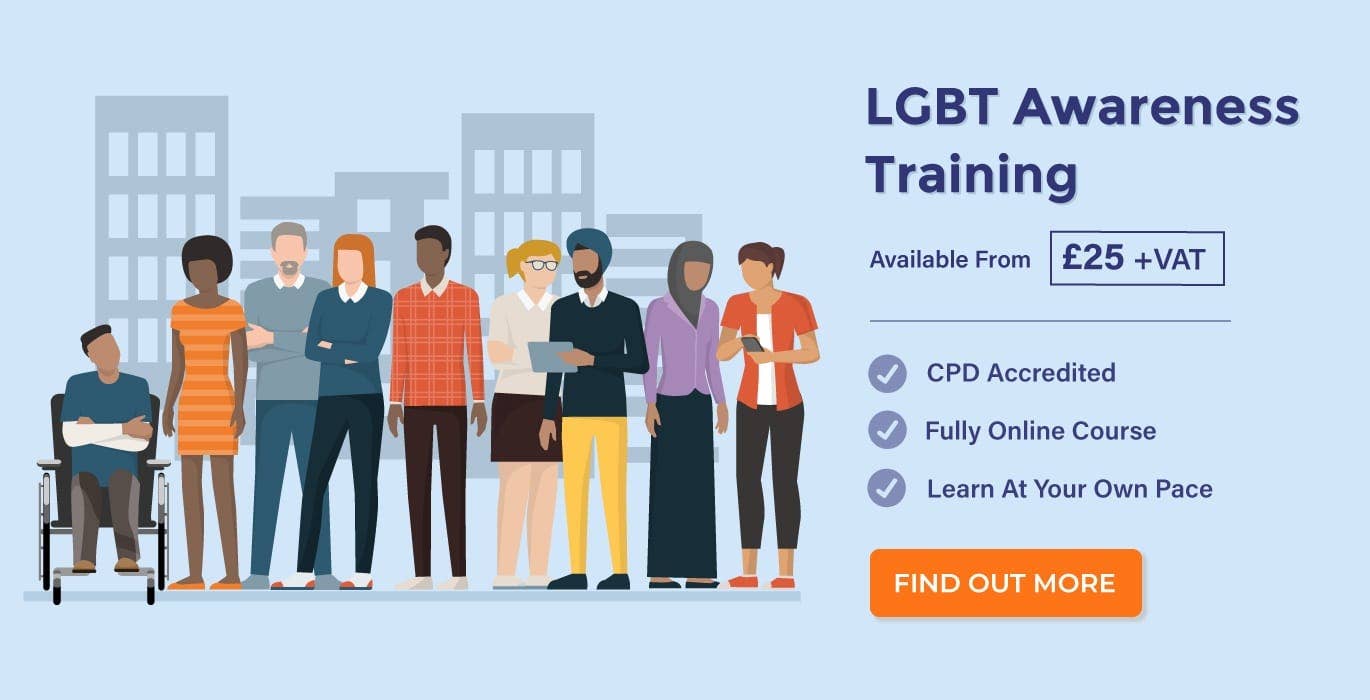 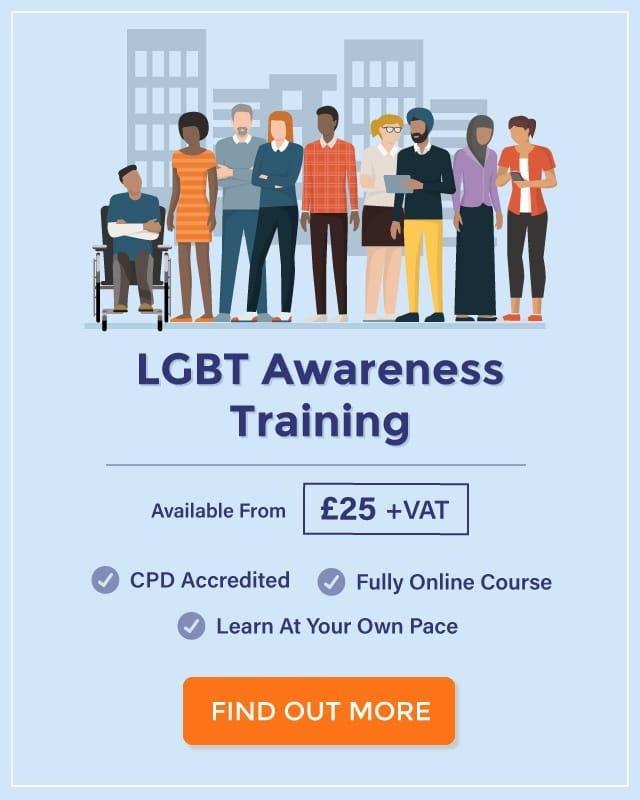 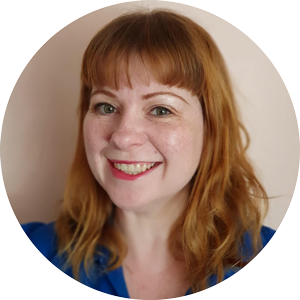 Claire Watts
Claire Watts is a Learning Designer with a primary focus on Education for High Speed Training. Claire has taught in primary schools for almost 10 years, with specialisms in SEND, Children and Young People's Mental Health and PSHE. She is enthusiastic about producing content that is tailored to, and truly benefits, teaching professionals.

Her favourite article is Why is Child Development So Important in Early Years?

How to Promote Equality & Diversity in the Classroom